How many conceptual links does it take to get from Charles Darwin to the father of chance music to my old hometown of Chicago? Would you believe one?

I called in the evening at the house of the “Governador”; the Signora was a Limerian & affected blue-stockingism & superiority over her neighbours. Yet this learned lady never could have seen a Map. Mr Hardy told me that one day a coloured Atlas was lying on a Pianoforte & this lady seeing it exclaimed, “Esta es contradanca”. This is a country dance! “que bonita” how pretty!

Which is pretty much exactly what John Cage did 143 years later with his piece A Dip in the Lake: Ten Quicksteps, Sixty-two Waltzes, and Fifty-six Marches for Chicago and Vicinity. (Cage had already done a similar piece about New York; hey, we wear that “Second City” badge with pride.) From the description in the online Cage catalog:

The concept of this work is to go to the places (in Chicago or any other city, by assembling a chance determined list of 427 addresses, grouping them in 10 groups of 2, 61 groups of 3 and 56 groups of 4) and either listen to, perform at and/or make a recording of the sounds at those locations.

(Hence the dances: quicksteps in 2, waltzes in 3, and marches in 4.) This is Cage’s map, from the website of Peter Gena, who produced the first realization of the piece for the 1982 New Music America festival: 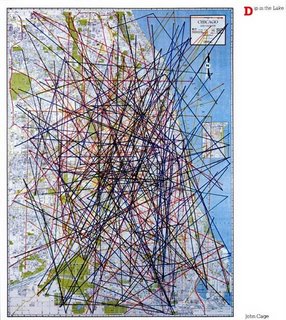 Between 2001 and 2003, Robert Pleshar did a new realization of A Dip in the Lake, which you can listen to over at UbuWeb. The waltzes are my favorite, but only because they boast the greatest concentration of sites in Niles, where I grew up. The whole thing is typically Cagean, that is to say, totally unassuming, yet at the same time, completely and unexpectedly absorbing.

Dined with Mr Aston; a very merry pleasant party; in the evening went with Mr Scott (the Attache) to hear a celebrated pianoforte player. – He said Mozarts overtures were too easy. I suppose in the same proportion as the music which he played was too hard for me to enjoy.