A few weeks ago, I mentioned a bunch of Klimt paintings that had been looted by the Nazis during World War II and then, recently, had been returned to the descendants of their original owners. This week, some of those Klimts are being auctioned off. Which ended up being the second biggest art story of the week, after another painting came under similar suspicion. 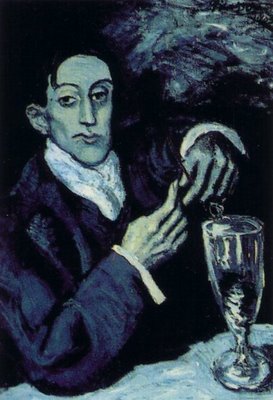 You’re looking at Picasso’s “Portrait of Angel Fernandez de Soto,” a masterpiece from the artist’s Blue Period. A federal judge temporarily blocked (and then allowed) the painting’s sale this week, responding to a lawsuit by Julius Schoeps, who claimed that the Nazis had improperly pressured his great-uncle to sell the work below market value back in the 1930’s. That is, his great-uncle Paul von Mendelssohn-Bartholdy, as in Felix Mendelssohn-Bartholdy (Paul was his nephew). In addition to heading the Moses Mendelssohn Center at the University of Potsdam, Schoeps has been pursuing the divested remnants of the Mendelssohn family’s rather impressive art collection; he similarly challenged the 2004 sale of Picasso’s “Boy With a Pipe.”

Oh, and the current owner of the Fernandez de Soto portrait? That would be Andrew Lloyd Webber’s charitable foundation. Mendelssohn suing Andrew Lloyd Webber! Schoeps’ attorneys say they will refile their suit in state court. Can we somehow get Randol Schoenberg involved with this? Because that would be awesome.

Update: the catalog for the auction is online. (There’s a couple of Mondrians. I’m a big fan. Christmas is coming up….)

Update, the sequel: Christie’s and Lloyd Webber pulled the painting off the block themselves, citing the pending state suit. Christie’s president Marc Porter warns: “We reserve the right to seek damages.” Imagine a British accent for the proper menace.