Music, too, plays an important role because it uplifts man’s spirits. It does so without speaking in man’s language, which complicates the business of distinguishing between a good and a bad piece of music. Sometimes you turn on the radio, listen to something, and say to yourself, “Who wrote this junk?” Then you find out it was written by Tchaikovsky or some other famous composer. Then again, sometimes you turn on the radio and hear the same music, only this time you think it’s beautiful—all because you’re in a different mood.

That’s Nikita Khrushchev, from Khrushchev Remembers: The Last Testament, edited and translated by Strobe Talbott (out of print, but you can probably find a copy here). He also tells a fascinating story about the political calculation behind giving Sviatoslav Richter permission to travel:

I told our collective leadership that I was in favor of allowing him to go abroad, They reminded me there was a chance he wouldn’t come back. “So what,” I replied. “We’ve got to take certain risks…. He may very well come back after all, and that would be good propaganda for our culture and our regime.”

Khrushchev, who was an opera fan (his son-in-law was director of the Kiev Opera, in fact) had a predilection for risk worthy of Don Giovanni. And like the good Don, it did him in; ousted in a bloodless coup, he spent the last seven years of his life under essentially house arrest. He probably would make a good operatic character—earthy and sutble, charming and brutal, with a soul that ran the moral gamut from light to dark. 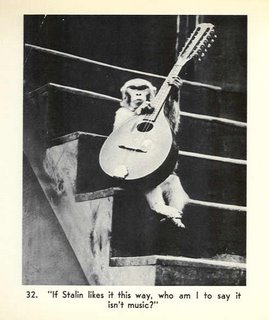 (Illustration from Hans Muller’s Communist Zoo, also out of print. I found the image on a discussion board for comic book collectors.)